When I first started following Jesus, it was for one reason:

I didn’t want to go to hell.

Call it bad theology or someone’s desperate attempt to get young people to behave, but maybe that’s part of your story, too. You heard about how bad hell was, and how bad you were, and that if you didn’t get saved, you were going to spend eternity in a lake of fire. That didn’t sound awesome, so you “got saved.” (AIR QUOTES) It’s not a great interpretation of the teachings of Jesus and it’s a really destructive concept to instill into kids. But over the years, and as a result of countless people who mentored me, I now realize that following Jesus is much more than simply fire insurance. It’s about loving others really well. It’s about making sure I love myself well so that I have the ability to love others well. It’s about listening to the Holy Spirit on a minute-by-minute basis to hear my next right steps. It’s about seeking to make this world a more just place. It’s about bringing heaven to earth now much more than it is about avoiding hell later. And I wouldn’t have known those things if I didn’t have mentors in my life to help shape who I am and what I believe.

The book of 1 Timothy, was written by the apostle Paul to a young leader in the early Christian church named Timothy. Now Paul and Timothy shared a close relationship for about 20 years. It began during one of Paul’s early missionary journeys. Paul had previously traveled to a town called Lystra where some of the people had become Jesus-followers. Upon Paul’s return, he meets a young man – some think around 20 years old – and he is so impressed with his life and faith that he invites this young man – Timothy – to join him on his travels. Now, why did he do that? Did he need someone to take care of his busy work, go grab him lunch or coffee when he needed it? No, this was much more significant. Paul recognized that he couldn’t do what he was doing – going all over the known world, telling people about Jesus, starting churches – he wouldn’t be able to do that forever. He knew he’d need a successor, someone to continue long after he was gone.

At the time of the writing of this letter, Paul and Timothy are no longer together…otherwise, Paul would just say these things to Timothy, instead of writing a letter…but I digress. However, Paul is still in relationship with Timothy, very much an influencer in Timothy’s young life, and he speaks a wealth of wisdom through these letters we know as 1 & 2 Timothy. We can assume that a decent amount of time has passed since their first meeting because Timothy is now a pastor. He is now overseeing a group of believers himself – teaching and showing them what it looks like to live the Jesus life. He was leading a movement of Jesus-followers who gathered in homes to worship, pray, fellowship, and bring others along the journey. Here is what Paul wants his young protegee to know:

Command and teach these things.
Don’t let anyone look down on you because you are young,
but set an example for the believers in speech, in conduct, in love, in faith and in purity.
Until I come, devote yourself to the public reading of Scripture, to preaching and to teaching.
Do not neglect your gift, which was given you through prophecy when the body of elders laid their hands on you.

The remainder of the letter reads like an instruction manual for how Timothy should live his life. Paul very easily could have continued on in his journeys as a one-man show, happy to do what he did best without anyone else to jack it all up. But he didn’t. Paul had an eye for the future and a heart for the mission of Jesus Christ.

It’s a theme that flows throughout the Bible. Examples of mentoring are littered throughout Scripture. The Old Testament tells us how Naomi mentored Ruth into becoming a legend of God’s miraculous provision. Moses mentored Joshua right into the Promised Land. Elizabeth mentored her cousin Mary into birthing the Savior of the world. And of course, Jesus mentored a group of 12 seeming nobodies – who went on to transform the world.

As I think about the mentors in my life, the first people who come into my mind are my Uncle Larry and Aunt Ruth. When my parents divorced during my tween years, it was Uncle Larry and Aunt Ruth who allowed my mom, brother, and me to live with them. They were the ones who introduced me to church. They were the first ones who showed me what living the Jesus life looked like. I watched as they followed Jesus and loved people well and learned from them. When I was between colleges, working at a radio station up in Perrysburg, barely making enough money to scrape by, it was my aunt and uncle who encouraged me to go back and finish my degree. And later in life, when I was struggling with the lame singles group at our church, it was my uncle who suggested that I instead try volunteering in the youth ministry at our church that he led, starting a journey of pouring into the lives of young people that continues to this day. Uncle Larry and Aunt Ruth understood that mentored people mentor people, and I’ll forever be grateful for how they mentored me.

No one wants to get to the end of their lives and realize that they haven’t made any sort of impact in the world. We all want to make a difference – it’s how we leave a legacy. Those of you who have had mentors in your life can look back and see whose shoulders you stood upon to get to where you are today. And many of them could, in turn, tell you whose shoulders they stood upon. And so, on down through history. Does that mean that each of the lives you touch will come to you and express deep gratitude for the impact you had in their lives? Maybe, and maybe not. But it’s not about the recognition – it’s about stepping into the movement of God – being part of the greater picture of relational community – by simply helping someone else as they go along their journey.

Because you have life experiences, because you have a track record of following Jesus, because you have the Holy Spirit living inside of you, you may not be enough, but you have enough. You are not responsible for giving your mentee everything they need for the rest of their life. That’s just too much pressure. Your responsibility is to simply empty your cup. Whatever you have in it – time to listen, a skill to share, words of genuine encouragement, a knack for engaging kids – it may feel like a lot or it may not feel like much – but your responsibility is simply to empty it out for the benefit of someone else.

Shawna and Derrick Williams are a great example of a family doing a great job of emptying out their cup for those in their neighbhorhood:

We can make a difference in this world simply by emptying our cup out for the benefit of someone else.

Whose cup will you pour into? 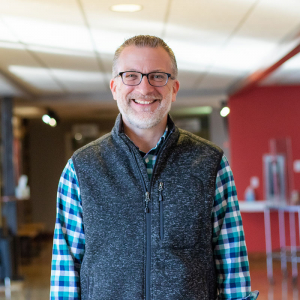