Skip to content
Freely Disagree | What do we do if we disagree about the Bible? | Pastor Rachel Billups

Freely Disagree | What do we do if we disagree about the Bible?

When church folk have a disagreement, the Bible is usually at the center of our issues.

But what is the Bible?

The Bible holds an old and a new testament.

That word testament really means covenant or testimony.   The testimony of God’s people as captured through the Torah, the 5 books of Moses, plus the prophets, and the wisdom writings.  All of this collected to make up the Old Testament and what our Jewish brothers and sisters call the Hebrew scriptures.

Most of us use a version of the Old Testament that includes 39 books, partnered with the 27 books of the New Testament to make a grand total of 66 books in the Bible.  It’s also important to know that these 66 books were written by roughly 40 different authors over the course of 1500 years, rifling through a variety of eras of human history in what’s known today as the Mediterranean world.

Councils were held to compile what we call the cannon of scripture. The Old and New Testament we read from today wasn’t compiled until the first council in Nicaea in 325 AD–.325 years after Jesus birth!

The Bible wasn’t official until 200 years after the last gospel was written. That’s like a council meeting today to discuss what from the 1700s should be included in textbooks for kids in 3522!

Things are a little different from the 1700s, aren’t they?

Interpretations, versions and variations, translations, paraphrases and embellishments…tricky characters and language barriers. Culture wars and sermon bores.  It’s why conversations about scripture can get pretty sticky pretty quickly. There are major barriers.

Sometimes we are afraid to use the version that speaks in modern language – the lingua franca –because of tradition or grandma or both.  And yet following Jesus is about the story of God becoming flesh and blood and moving into the neighbor among a particular people, at a moment in human history, inviting the whole lot, insiders and outsiders to live differently.

It was through prayer and discernment, but literally blood, sweat and tears that you and I have copies of this holy writing in our hands and on our phones.

From the printing press to Bible translators like Wycliffe, to men and women today endangering their lives to smuggle Bibles into places and spaces where they are forbidden.  It’s serious and sobering to realize all that’s come together so that we can utter, the Bible tells me so.

No matter what our previous knowledge of all this has been, we must all own our pre-conceived notions and assumptions about these words from God.

When we read, study, and teach what the Bible says, there is a little fear and trembling.  On any given day I talk to people who are afraid of saying or doing something wrong, because they are unsure of how the Bible really applies to their daily lives.  Others feel confident in what the Bible says, except they start quoting things like, “God helps those who help themselves.” Well… actually Benjamin Franklin wrote that in Poor Richard’s Almanac in 1757.

It can get downright confusing when people passionately use the Bible to argue differing opinions on the same subject. 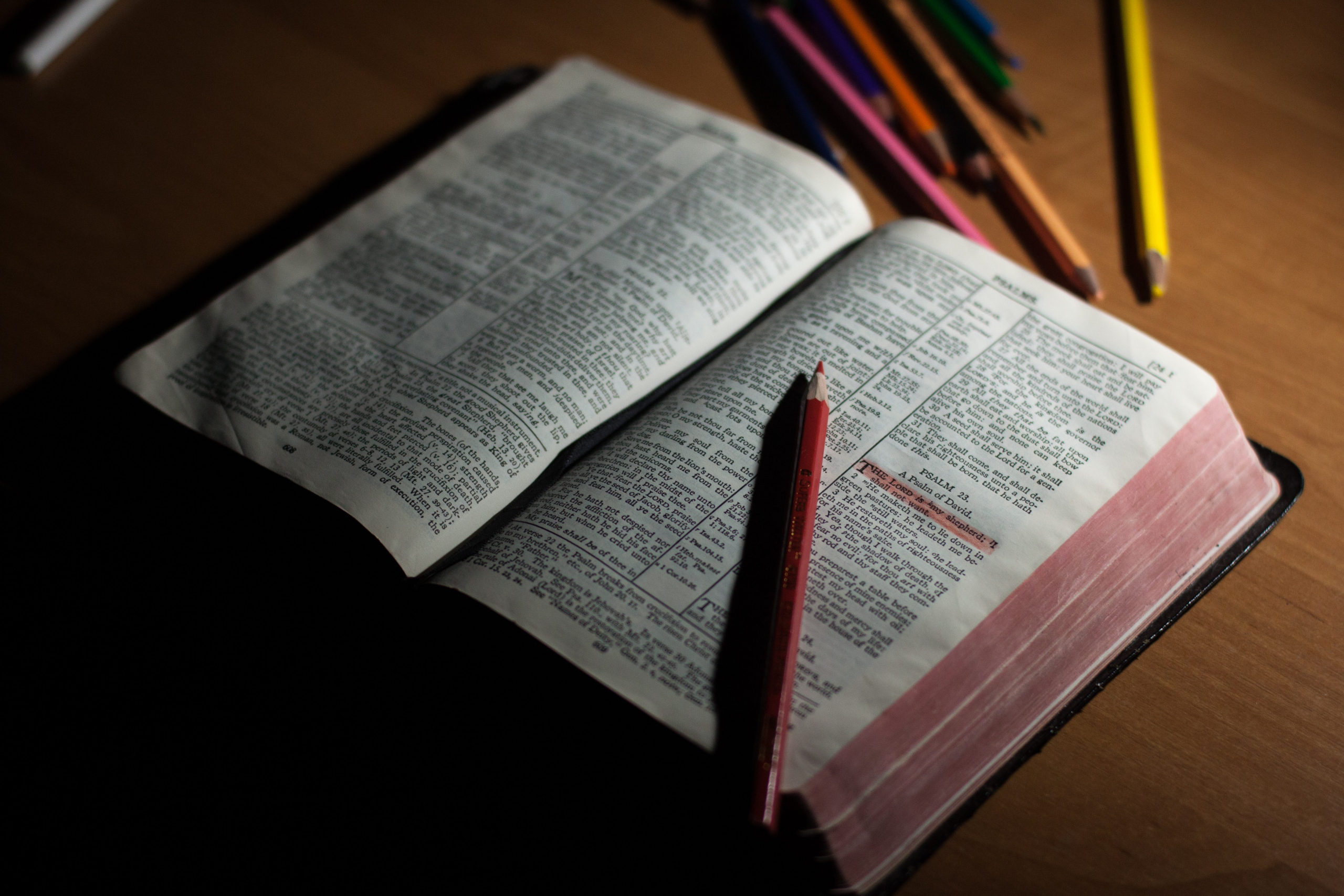 Twenty years ago, while I was driving through a small town in Ohio, I noticed a man dressed in what I could imagine was 1st century garb carrying a 12-foot cross with a wheel on the bottom, sliding that very heavy structure of wood down the sidewalk.  I was intrigued and being the curious Jesus follower that I was I decided I was going to stop and talk to the fellow.  I wondered what he was doing and discovered that he and his family traveled throughout the country carrying this cross to drum up conversations about Jesus, his death and resurrection and how people could experience new life through Jesus Christ.

I asked him questions, like where all have you been, have folk ever been harsh and how do you determine where you going next? I’m 100 percent sure I asked how do you afford to eat, was this kind of one of those situations where they depended on the Holy Spirit to guide them to other believers in towns who would provide resources for them while they were there?  Not exactly – but close.

There we were, 20-year-old pastor Rachel and this Jesus impersonator having just the best conversation on the sidewalk, that was until he asked about what I did for a living, I said I am studying to be a pastor, in fact I was preaching at my home church at the time, filling in for our pastor for an entire month.

“Pastor?” he said “You can’t do that; the Bible tells you so. You can be an evangelist, like my wife is, but you can’t be a pastor.”

And then he pulled out this like electronic pocket Bible out of his robe—which friends, was just weird, I didn’t expect Jesus to have an electronic Bible, but anyway, he started quoting scriptures to me, from the King James version.

I asked, “don’t you read a more modern translation?”  Nope.

He explained that this one came straight from the one Jesus would have read.

I said, “you know that that Bible was commissioned in 1611, by King Jimmy himself and that he wasn’t exactly the most moral and upstanding king, right?  Or that when the Bible was translated it was translated from a variety of fragments of the New Testament and Old because there isn’t like one original manuscript in a museum somewhere. Or that there’s been amazing archeological discoveries like the Dead Seas scrolls in 1947 that totally revolutionized biblical scholarship.”

That’s where the conversation ended.

I left scratching my head.

How could the first hour of our conversation between awesome encouraging and uplifting, but the moment we got into the weeds of which version of the Bibles is the real version or even the best version, the conversation was over.  He was right and I apparently was wrong.

There will be moments in your faith journey when your lens will be smashed, and you’ll have a choice to make.

You can wrestle or you can reject.  It’s called Cognitive dissonance – Learning how to process and receive information that contradicts what we thought to be true.

We can either double down on our opinions, or we can open our minds, hearts and faith to holy other opinions.

The Bible points to Jesus

“Do not think that I have come to abolish the Law or the Prophets; I have not come to abolish them but to fulfill them. For truly I tell you, until heaven and earth disappear, not the smallest letter, not the least stroke of a pen, will by any means disappear from the Law until everything is accomplished. Therefore anyone who sets aside one of the least of these commands and teaches others accordingly will be called least in the kingdom of heaven, but whoever practices and teaches these commands will be called great in the kingdom of heaven. For I tell you that unless your righteousness surpasses that of the Pharisees and the teachers of the law, you will certainly not enter the kingdom of heaven” (Matthew 5: 17-20 NIV).

Matthew chapter 5 was Jesus inviting us to pick up a new pair of glasses. Jesus didn’t come to abolish or destroy the law and the prophets. Jesus is gifting us a new way to see the world.

For the next several chapters of the Sermon on the Mount, Jesus enters the divine dance…

Jesus went on to talk about divorce, oaths, revenge, love for our enemies – hard conversations!

“You have heard it said, ‘love your neighbor and hate your enemy’, but I tell you love your enemies and pray for those who persecute you, that you may be children of your Father in heaven” (Matthew 5: 43-45 NIV).

Jesus sharpens what needs to be clear for us. Rather than cling to our favorite interpretation, let’s cling to Jesus, the lens and interpreter of the whole of the Bible.

When asked what the greatest commandment was, what did Jesus say?

This is the lens! This is what matters most. What should we do when we disagree about the Bible? Love God, love myself and love others.  Friends it can’t get much simpler than that.

At the end of the day no one person has the mind of God or the monopoly on the Holy Spirit, it takes the entire community of faith to search and live this out – and at times to freely disagree in love.

For a good practice of reading the Bible, try this: Read, Listen, Learn, Wrestle, Apply.