Passion: The Power of Love

I can’t believe the news today

Oh, I can’t close my eyes and make it go away

How long, how long must we sing this song?

How long? How long?

We can be as one

Bodies strewn across the dead-end street

But I won’t heed the battle call

I’ve always been drawn to the lyrics of Sunday, bloody Sunday. Early in my pastoral career, I would listen to it in preparation for every message I wrote. Something about naming the realities of oppression welled up within me a hunger for God’s justice and reign.

In Luke’s gospel chapter 23, Jesus stood trial before the Roman prefect, Pontius Pilate, and then Jewish ruler, Herod Antipas.  Jesus future, and ours, hung in the balance.  The struggle for power is on full display.

“Then the whole assembly rose and led him off to Pilate. 2 And they began to accuse him, saying, “We have found this man subverting our nation. He opposes payment of taxes to Caesar and claims to be Messiah, a king.” 3 So Pilate asked Jesus, “Are you the king of the Jews?” “You have said so,” Jesus replied. 4 Then Pilate announced to the chief priests and the crowd, “I find no basis for a charge against this man.” 5 But they insisted, “He stirs up the people all over Judea by his teaching. He started in Galilee and has come all the way here.” 6 On hearing this, Pilate asked if the man was a Galilean. 7 When he learned that Jesus was under Herod’s jurisdiction, he sent him to Herod, who was also in Jerusalem at that time. 8 When Herod saw Jesus, he was greatly pleased, because for a long time he had been wanting to see him. From what he had heard about him, he hoped to see him perform a sign of some sort. 9 He plied him with many questions, but Jesus gave him no answer. 10 The chief priests and the teachers of the law were standing there, vehemently accusing him. 11 Then Herod and his soldiers ridiculed and mocked him. Dressing him in an elegant robe, they sent him back to Pilate. 12 That day Herod and Pilate became friends—before this they had been enemies” (Luke 23: 1-12 NIV).

We are tempted by power.

We don’t have to be in charge of a nation or hold a major leadership position. We only have to possess a deep desire to be on the winning side.

Jesus stood before two political extremes, two teams if you will: Pilate who has pledged his allegiance to Rome and the protection of the Empire, and Herod, who has leveraged his religious affiliations for power and oppressive privilege. Two political camps, one that claimed the core of its mission was peace (“Pax Romana”, the Peace of Rome), and the other leveraged his religious identity for political gain.

If left unchecked, our political affiliations give us a false sense of security and identity, tempting us to hold onto the love of power.

Jesus was political.  It’s what got Jesus crucified.  His very way of life was so offensive, so countercultural that he became a threat to the seemingly powerful people that surrounded him.

But we shouldn’t be surprised.

“God has performed mighty deeds with his arm; he has scattered those who are proud in their inmost thoughts.  He has brought down rulers from their thrones but has lifted up the humble. He has filled the hungry with good things but has sent the rich away empty” (Luke 1: 51-53 NIV).

This is the great reversal.  It’s God’s upside-down kingdom and it’s in stark contrast to the love of power.

It’s interesting that Pontius Pilate is characterized by Luke’s gospel as a hesitant instrument of the Roman Empire. Three times in the gospel of Luke Pilate states that he doesn’t find any fault in Jesus.  But before we paint Pilate with a good guy brush, it’s important to know that Pilate was more than just an obscure figure in Jesus’ passion narrative.

Pilate was NOT a great guy.  He was described by Jewish 1st century historians, Philo and Josephus as greedy, inflexible, cruel and an oppressive thief.  Luke tells us that he killed Galileans in Jerusalem to make sacrifices.

“Now there were some present at that time who told Jesus about the Galileans whose blood Pilate had mixed with their sacrifices,” (Luke 13: 1 NIV).

Pilate loved power.  But not only Pilate.  Herod Antipas as well.

Herod Antipas had jurisdiction over Galilee and Peraea: 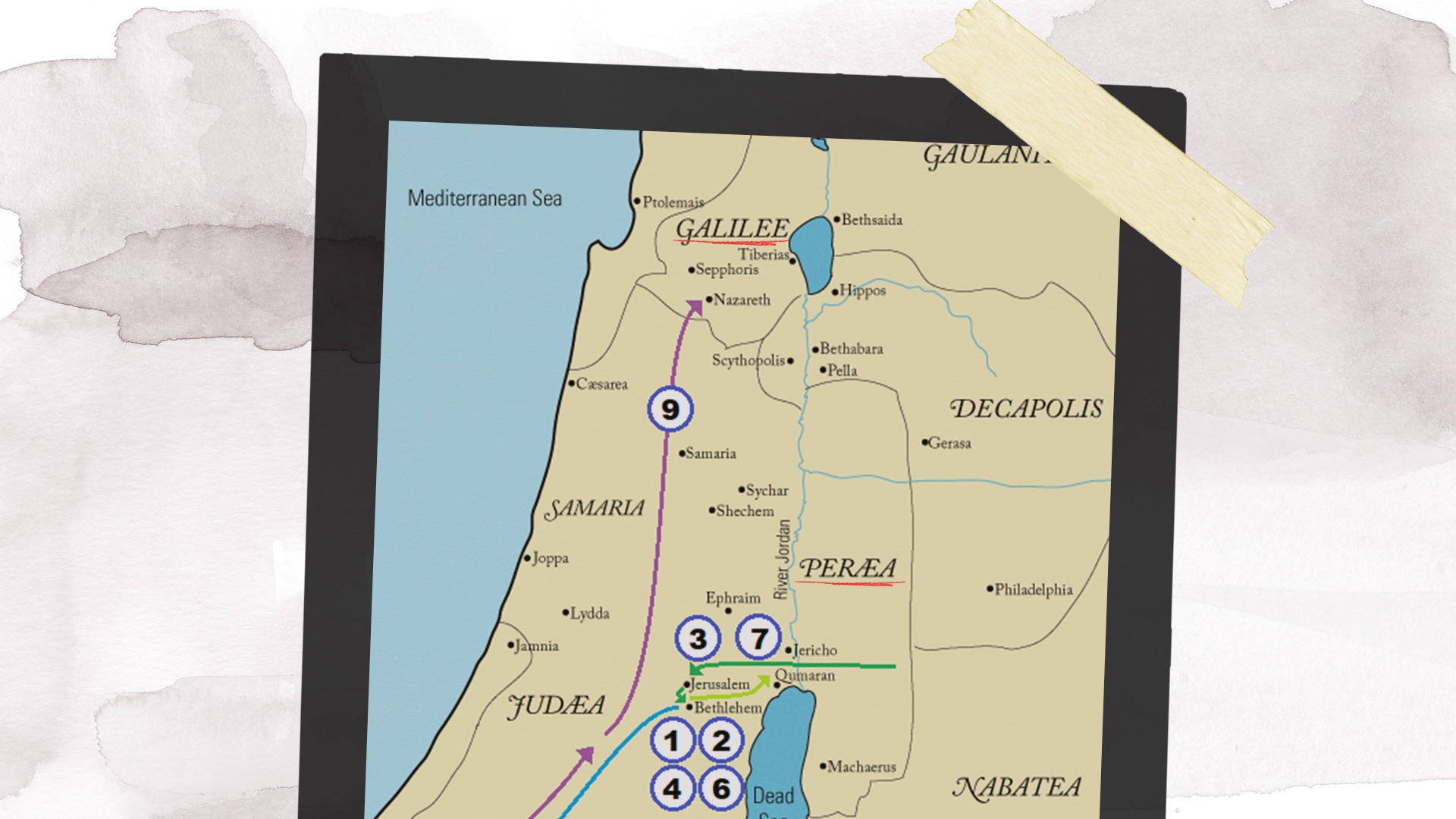 These are territories where both Jesus and John the Baptizer lived out their primary ministry.

This is the Herod who gave his stepdaughter John the Baptizer’s head, for fun.

Power, privilege, oppression, that’s the name of the game for the Herods and Pilates of the world.

“When Herod saw Jesus, he was greatly pleased, because for a long time he had been wanting to see him. From what he had heard about him, he hoped to see him perform a sign of some sort” (Luke 23: 8 NIV).

Herod was pumped.  He wanted to experience what he believed was some kind of traveling miracle worker.  Herod was ready for some religious sign, some supernatural wonder.  But Jesus didn’t comply.

Do you see what’s happening here?

Herod, client king of the region, was face to face with the King of Kings and Herod believed he had the power over Jesus’ life.  But he doesn’t!

“He plied him with many questions, but Jesus gave him no answer. The chief priests and the teachers of the law were standing there, vehemently accusing him. Then Herod and his soldiers ridiculed and mocked him. Dressing him in an elegant robe, they sent him back to Pilate” (Luke 23: 9-11 NIV).

Throughout our history as followers of Jesus we’ve been tempted to grab hold of the love of power and equate God’s will with the will of the state.

From Constantine’s commandeering the cross as a battle flag in the 4th century, to the Christian crusades and the ways in which the Bible has been welded as a weapon against people on the margins–We use the sword of the Spirit as a way to cut down and cut out whole groups of people from the Kingdom of God.

The love of power is dangerous, it’s seductive, and we’ve got to be prayerfully careful.

No matter who your candidate of choice might be they are never going to be your savior.  Folks might attempt to place their future in the hands of Pilate or even Herod when they make a political candidate the end all be all.  People know they can manipulate their candidates by saying just the right things to stir up the love of power in both camps.

“They began to accuse him, saying, “We have found this man subverting our nation. He opposes payment of taxes to Caesar and claims to be Messiah, a king.”

“Yo, psst–Pilot, Jesus is one of those rebellious Galileans”. The religious knew how to push Pilates buttons.

Friends how many of us when we feel like we are losing ground, stir up the crowd because we are attempting to remain powerful and in control? Jesus gives us a new way, a third way, a new politic if you will…

THE WAY OF SUFFERING

When Jesus stood before those with “power”, Jesus chose silence.  He chose to suffer as a pathway to healing and reconcilation.

“Surely he took up our pain and bore our suffering, yet we considered him punished by God, stricken by him, and afflicted. But he was pierced for our transgressions, he was crushed for our iniquities; the punishment that brought us peace was on him, and by his wounds we are healed. We all, like sheep, have gone astray, each of us has turned to our own way; and the Lord has laid on him the iniquity of us all. He was oppressed and afflicted, yet he did not open his mouth; he was led like a lamb to the slaughter, and as a sheep before its shearers is silent, so he did not open his mouth”(Isaiah 53: 4-7 NIV).

Jesus suffered for you and me and the whole wide world.  He took on the pain and suffering of the world right in front of those who were the worst offenders.  They thought they had the power and yet, in this display of silence and suffering Jesus absorbs the power in the room.

In his book, The Motive, Patrick Lencioni wrote a parable that he claimed to be the most important story he’d ever written.

“I believe it’s long past time that we, as individuals and as a society, reestablished the standard that leadership can never be about the leader more than the led” (The Motive).

Lencioni goes on to write that all leadership is servant leadership.

“In your relationships with one another, have the same mindset as Christ Jesus: Who, being in very nature God, did not consider equality with God something to be used to his own advantage; rather, he made himself nothing by taking the very nature[b] of a servant, being made in human likeness. And being found in appearance as a man, he humbled himself by becoming obedient to death—even death on a cross!” (Philippians 2: 5-8 NIV).

Suffering means embracing the invitation to serve.  At the cross Jesus made it clear that we must reject the love of power and embrace the power of love.

The power of love transforms broken people, fractured communities and yes, even war-torn countries.  Jesus modeled this kind of love in a way the world hadn’t experienced before.

It was a love that turned the other cheek, a love that would rather be killed than to kill, a love that embraces enemies, elevates folks on the margins, reconciles relationships, and lavishes the whole dag-gone world with a wide swath of grace.

It’s ironic that even in this moment Jesus is seeking to reconcile the relationship between Pilate and Herod!

The scripture tells us that they became friends!  Sure they have a common enemy, but reconciliation is what Jesus does, this is who Jesus is!

In the end, love is all that survives. Love wins!